Nothing much to post since I’ve been focusing most of my creative force in writing my book. To my friends who were asking about my book’s progression, it’s doing well and I’m halfway in chapter seven. I am quite optimistic that i’ll be able to finish the first book before the year ends. All I need to do is set my priorities straight and I think some of my design works or projects will be pushed further back into a later date. 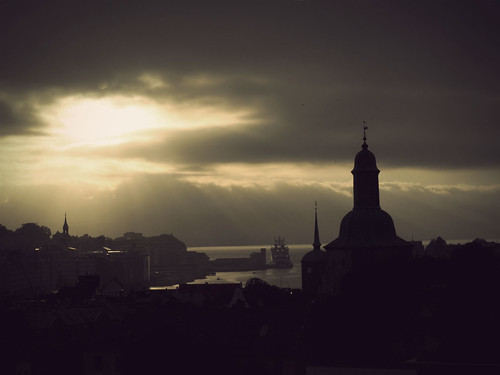 + I took this picture from our window at home.

On a lighter note, during my small breaks from writing, I’m honing my photography skills. It’s a waste if I don’t use my DSLR that much, so now I take it with me when I’m hiking or taking a stroll around the city. Expect that there will be tons of photos on my future entries.

Before ending this post, here’s an excerpt from my book:

Odd stepped forward and suddenly dark clouds began to form in the sky. Swirling rapidly like a maelstrom, snow started to fall from it. As the snow fell on the ground, ice sheets appeared spreading rapidly across the area. It froze everything on its track, but it didn’t seem to affect the hooded being as it stood there motionless. The entire glade now resembled an ice skating rink.
“Descend upon the frozen heavens, Tyr!” Odd said in a commanding voice. Instantly, snow spiralled beautifully on Odd as it flowed to his feet transforming his shoes into a pair of ice skates.
Alex was amazed with the display of Odd’s powers, but he was slightly confused to where Odd’s Overdrive was.
“Where’s your Overdrive?” he asked as he looked at Odd from head to toe and then he noticed the ice skates. The design was unusual. There were no zippers or shoelaces and it was silver in colour. Upon closer inspection, he saw that the entire thing was made of ice and it gave off a subtle glow.
“You mean Tyr? You’re looking at it,” Odd coolly said.
“Ice skates? Tha- that’s an unusual weapon,” Alex said while scratching his head.
Odd was amused with his best friend’s remark. “You’ll be surprised in what he can do.”
Without warning, Odd kicked with his right foot and ice waves instantly appeared from the ground straight in the direction of the hooded being who jumped to evade it.
“Oh ho, you’re not going anywhere,” Odd scoffed as he thumped his left foot on the solid ground and sharp icicles protruded from the surface trying to impale the hooded being who was fast enough to manoeuvre away from it. That seemed to irritate him so he raised his right hand and suddenly the falling snow turned into small razor-edged projectiles. With a swipe from his hand the icy bullets homed on the hooded being hitting it, and it fell to the ground like a swatted fly.
It tried to stand even though it was bleeding. Red liquid that dripped slowly from its dark outfit created a strong contrast from the whiteness of the snow on the ground. Giving no time for it to recover, Odd skated his way towards his enigmatic enemy to finish it off. Snow spiralled around him again streaming to his right arm as he held it out. It was instantly encased in solid ice and transformed into a shape of a lance.

Can anyone help me find or recommend me to a literary agent? Thanks in advance! *wink*