It’s Monday night. I was already feeling a bit giddy as my father and I were on our way to the hospital to pick up Odd before driving towards the airport. Odd asked us to fetch him because he had tons of things to do in his recently acquired store franchise, which was located inside the hospital. Also my father wanted to see Odd’s own store as well.

“Are you excited?” said Odd, turning from the car’s front seat with a hint of smile in his eyes.

“Yes! Ever since we got the confirmation,” I said, slightly jumping from the back seat of my father’s car. “I’ve been waiting for such a long time.” Emphasising on the word long.

“Yeah, around a month,” he said, shaking his head. “He’s quite impatient,” he added, glancing at my father, who caught Odd’s expression and made a small laugh.

“That’s nothing new,” my father said with a sigh, his eyes back on the road as he was driving.

It took half an hour drive from the hospital to the airport and we still had like an hour to spare. Impatience slithered like a snake around me as we sat in a café having coffee and cake while killing time. I hated the fact that the plane we were waiting for from Oslo was slightly delayed. After finishing the cake and coffee, we went down from the café and waited for like thirty minutes more.

“Relax, he’ll arrive soon,” said Odd, touching me slightly on my hips as we were standing with my father at the baggage claiming area. “Let’s just look out for a large man carrying a large black bag.”

“Fine,” I said, shifting my eyes towards a flight of stairs, which a stream of people were suddenly pouring out. I felt excited again and even more so when I spotted the guy Odd described earlier. “He’s here!”

“Where?” said my father, craning his neck amidst the crowd.

I wasn’t able to answer my father because I went ahead and approached the said guy, who appeared to be searching for us as well. Odd was following me.

“Bjørn,” he said, shaking my hand vigorously before moving towards Odd and shook his hand as well.

“Nice to meet you,” said Bjørn with a hearty smile and then he pointed to a bench where my father was sitting. “Let’s go over there.”

We followed Bjørn to the bench where my father greeted him as he immediately placed the large black bag on the bench. I approached the bag as Odd, my father and Bjørn were talking. I could tell that there were some slight movements inside the bag through the mesh on all of its sides.

“I’ve been waiting for you for so long,” I muttered as I began to open the bag and something orange popped up, which took my breath away. 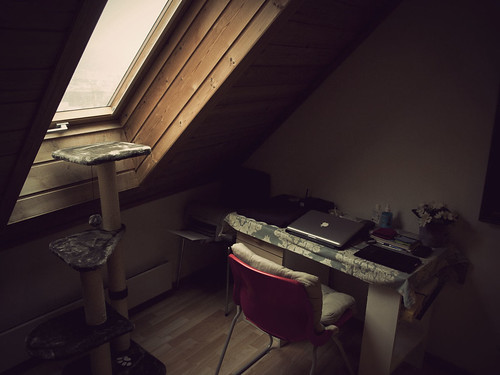 + There’s a clue in this picture.

What is that something orange that came out from the large black bag? The first one who can guess the race and breed will win a souvenir from my beloved country of Norway (those who already knew are automatically disqualified :)). Have fun! P.S. I’ll be dropping some clues in the comment section.