We were strangers, starting out on a journey-” goes the song as Donna Lewis’ At The Beginning started to play on my Spotify. I like this song and the timing couldn’t be more perfect as I was working with a project called The Journey of a Centimetre.

I’ve been working with this project for a week now, and with some small colour adjustments in Photoshop CS5, I’m ready to go.

I beckoned Odd, who was sitting on the sofa with his laptop on his lap, probably reading Wikipedia or checking Google Earth, over to my desk.

He looked at me with me an enthusiastic smile as he stood and came towards me.

“Here, take a look,” I said, moving away from my computer’s screen so Odd could get a nice view of my finished project. 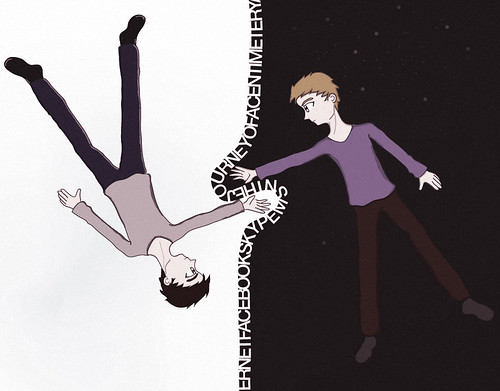 + The Journey of a Centimetre

“What’s the story behind the illustration?” he said while stroking my head gently with his hand.

It’s about us. Our journey of a centimetre,” I said quickly, pointing at the figures in the illustration. “The two boys, who are reaching out represent us while the string of words represents the barrier we once had during the time when we’re separated for a thousand miles.”

I glanced back and Odd gave me a confused look.

“I’m not yet done,” I said with a grin. “I interpreted our constant communication online, everyday while we’re separated as our journey. Thanks to modern technology, we’re allowed to see and talk to each other as if the other person was there in the flesh.”

I took a deep breath and continued. “Despite all of that, there’s always the need to feel the other person, but it’s impossible because of a physical barrier, in a form of a centimetre thick computer screen aside from the distance. “

“So what are those words?” he said, tilting his head to read. “Facebook…Skype…MSN…I got it! The string of words represents the computer screen.”

“You’re right. “I said, looking back at the illustration. “Also, the background represents night and day due to the time difference even though we’re online at the same time.”

“That’s a really good project,” he said, beaming at me.

“Thank you,” I said, and I kissed him on his lips. It was soft and delicate.

He kissed me back before he went back to the sofa, resuming what he was doing earlier.

I turned to my computer, and with a smile I submitted my project online as the song came to its conclusion.